Electron. J. Statist. 15(1): 1228-1262 (2021). DOI: 10.1214/21-EJS1813
This article is only available to subscribers. It is not available for individual sale.
Get copyright permission
This will count as one of your downloads.
You will have access to both the presentation and article (if available).
DOWNLOAD NOW

We would like to thank Dr. Danica Ommen for her help in the initial implementation of ABC for forensic evidence. We would also like to thank the anonymous reviewers whose comments and suggestions helped to improve and clarify our manuscript. 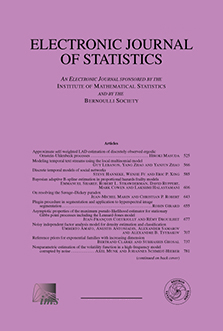