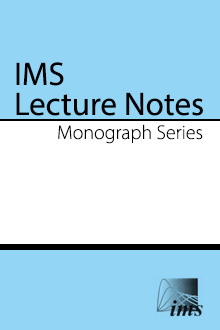 Our purpose in this paper is to apply the general methodology for model selection based on T-estimators developed in Birgé to the particular situation of the estimation of the unknown mean measure of a Poisson process. We introduce a Hellinger type distance between finite positive measures to serve as our loss function and we build suitable tests between balls (with respect to this distance) in the set of mean measures. As a consequence of the existence of such tests, given a suitable family of approximating models, we can build T-estimators for the mean measure based on this family of models and analyze their performances. We provide a number of applications to adaptive intensity estimation when the square root of the intensity belongs to various smoothness classes. We also give a method for aggregation of preliminary estimators.

We study the asymptotic behavior of piecewise constant least squares regression estimates, when the number of partitions of the estimate is penalized. We show that the estimator is consistent in the relevant metric if the signal is in $L^2([0,1])$, the space of càdlàg functions equipped with the Skorokhod metric or $C([0,1])$ equipped with the supremum metric. Moreover, we consider the family of estimates under a varying smoothing parameter, also called scale space. We prove convergence of the empirical scale space towards its deterministic target.

Suppose that one observes pairs $(x_1,Y_1)$, $(x_2,Y_2)$, \ldots, $(x_n,Y_n)$, where $x_1 \le x_2 \le \cdots \le x_n$ are fixed numbers, and $Y_1, Y_2, \ldots, Y_n$ are independent random variables with unknown distributions. The only assumption is that ${\rm Median}(Y_i) = f(x_i)$ for some unknown convex function $f$. We present a confidence band for this regression function $f$ using suitable multiscale sign-tests. While the exact computation of this band requires $O(n^4)$ steps, good approximations can be obtained in $O(n^2)$ steps. In addition the confidence band is shown to have desirable asymptotic properties as the sample size $n$ tends to infinity.

Marshall's lemma is an analytical result which implies $\sqrt{n}$--consistency of the distribution function corresponding to the Grenander estimator of a non-decreasing probability density. The present paper derives analogous results for the setting of convex densities on $[0,\infty)$.

We consider zero-range processes in $\Z^d$ with site dependent jump rates. The rate for a particle jump from site $x$ to $y$ in $\Z^d$ is given by $\lambda_x g(k) p(y-x)$, where $p(\cdot)$ is a probability in $\Z^d$, $g(k)$ is a bounded nondecreasing function of the number $k$ of particles in $x$ and $\lambda = \{\lambda_x\}$ is a collection of i.i.d. random variables with values in $(c,1]$, for some $c>0$. For almost every realization of the environment $\lambda$ the zero-range process has product invariant measures $\{\nlv: 0\le v \le c\}$ parametrized by $v$, the average total jump rate from any given site. The density of a measure, defined by the asymptotic average number of particles per site, is an increasing function of $v$. There exists a product invariant measure $\nlc$, with maximal density. Let $\mu$ be a probability measure concentrating mass on configurations whose number of particles at site $x$ grows less than exponentially with $\|x\|$. Denoting by $S_{\lambda}(t)$ the semigroup of the process, we prove that all weak limits of $\{\mu S_{\lambda}(t), t\ge 0 \} $ as $t \to \infty$ are dominated, in the natural partial order, by $\nlc$. In particular, if $\mu$ dominates $\nlc$, then $\mu S_{\lambda}(t)$ converges to $\nlc$. The result is particularly striking when the maximal density is finite and the initial measure has a density above the maximal.

We study a high-dimensional generalized linear model and penalized empirical risk minimization with $\ell_1$ penalty. Our aim is to provide a non-trivial illustration that non-asymptotic bounds for the estimator can be obtained without relying on the chaining technique and/or the peeling device.

I explain so-called quantum nonlocality experiments and discuss how to optimize them. Statistical tools from missing data maximum likelihood are crucial. New results are given on CGLMP, CH and ladder inequalities. Open problems are also discussed.

In the simple mean-field \emph{SIS} and \emph{SIR} epidemic models, infection is transmitted from infectious to susceptible members of a finite population by independent $p-$coin tosses. Spatial variants of these models are proposed, in which finite populations of size $N$ are situated at the sites of a lattice and infectious contacts are limited to individuals at neighboring sites. Scaling laws for both the mean-field and spatial models are given when the infection parameter $p$ is such that the epidemics are critical. It is shown that in all cases there is a critical threshold for the numbers initially infected: below the threshold, the epidemic evolves in essentially the same manner as its branching envelope, but at the threshold evolves like a branching process with a size-dependent drift.

This paper is about optimal estimation of the additive components of a nonparametric, additive isotone regression model. It is shown that asymptotically up to first order, each additive component can be estimated as well as it could be by a least squares estimator if the other components were known. The algorithm for the calculation of the estimator uses backfitting. Convergence of the algorithm is shown. Finite sample properties are also compared through simulation experiments.

The paper reexamines an argument by Talagrand that leads to a remarkable exponential tail bound for the concentration of probability near a set. The main novelty is the replacement of a mysterious calculus inequality by an application of Jensen's inequality.

We introduce a model of a randomly growing interface in multidimensional Euclidean space. The growth model incorporates a random order model as an ingredient of its graphical construction, in a way that replicates the connection between the planar increasing sequences model and the one-dimensional Hammersley process. We prove a hydrodynamic limit for the height process, and a limit which says that certain perturbations of the random surface follow the characteristics of the macroscopic equation. By virtue of the space-time Poissonian construction, we know the macroscopic velocity function explicitly up to a constant factor.

We consider the convergence of empirical processes indexed by functions that depend on an estimated parameter $\eta$ and give several alternative conditions under which the ``estimated parameter'' $\eta_n$ can be replaced by its natural limit $\eta_0$ uniformly in some other indexing set $\Theta$. In particular we reconsider some examples treated by Ghoudi and Remillard. We recast their examples in terms of empirical process theory, and provide an alternative general view which should be of wide applicability.