Bernoulli 28(1): 239-254 (February 2022). DOI: 10.3150/21-BEJ1340
This article is only available to subscribers. It is not available for individual sale.
Get copyright permission
This will count as one of your downloads.
You will have access to both the presentation and article (if available).
DOWNLOAD NOW

The author gratefully acknowledges funding by DFG SFB 755, project B8, DFG SFB 803, project Z2, DFG HU 1575/7 and DFG GK 2088. I am very grateful to Stephan Huckemann for many helpful discussions and detailed comments to the manuscript, Andrew Wood for an inspiring discussion and John Kent and Kanti Mardia for helpful pointers in terms of data application. I would like to thank the anonymous reviewers, whose suggestions helped improve the manuscript. 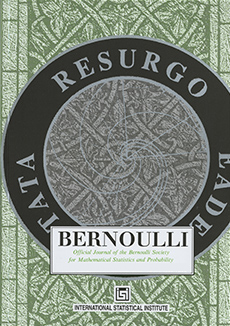